The first thing I noticed right after hooking up the speakers (a pair of 120Us) and before I even had them positioned for the best sound stage, was that they drew me in. I just had to sit down and close my eyes. I wanted to continue the positioning process but it was a little tug of war to stop listening. I couldn't believe the sound from these little speakers and after living with them I see that you “can” believe them because they tell the truth. When the broadcast material is weak or thin, the Tetras show it.

The 120Us serve as multi-purpose speakers for me as they are the left and right fronts of my 5.1 surround system, which I use for jazz (on cable TV), CDs, DVDs, and TV. Of course it's always better listening to CDs in stereo (without the other speakers in the surround system). Watching a video with surround sound, the Tetras prduce a much better center than the system's center speaker does. I may have to shut that center speaker off and let the Tetras handle it.

I spent my life in a love affair with the Hammond B3 organ and as you can see in the picture, I use two Leslie speakers. With that set-up, I'm really hearing the bass. One of the first things I was interested in hearing from the Tetras was how they handled the bass lines from my collection of organ CDs. The short answer is: If the recording had good bass, the Tetras reproduced it perfectly. One of my favorite organists for pedal work is the late Torontonian Doug Riley. A great example of his playing can be found on guitarist Jake Langley's album, Doug's Garage. Check out cut #3 on Jimmy Smith's Blue Bash, and cut #7 on The Jody Grind (Horace Silver). Now, all of my favorite organ players and their bands can be found playing live in my music room ;-) 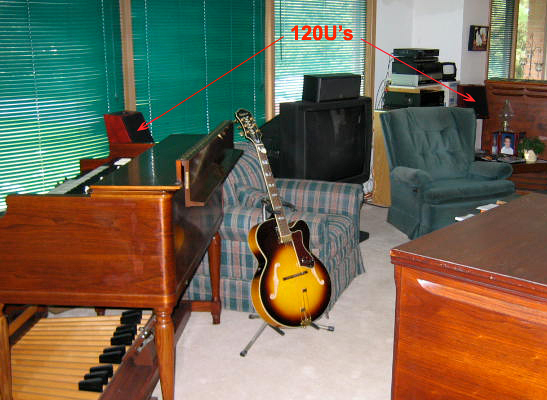