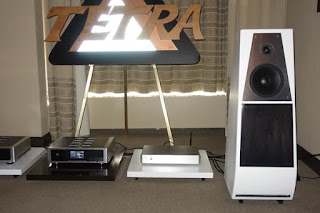 I was walking down the hall, working my way from room to room, and I noticed the sign over a door: Tetra Speakers/Tetrasonic Productions. The first name I had heard of, the second one not so much, so I went inside and had a seat, and listened to an unknown-to-me female singer-songwriter (whose name, I learn later, is Sophia Radisch). The songs were interesting, the voice compelling, and the recording quality well above average: very direct, clear, tactile, and present sounding. I asked for system details, but the pleasant young man running the dem knew only that the integrated amp and digital player were from NAD, and that the speakers were, of course, Tetras. And then he stepped away to contact Tetra CEO Adrian Butts, who at that time was overseeing another of the Ottawa-based company's demonstrations, elsewhere at the show.

Adrian Butts showed up—turns out I had met him before, ages ago—and I asked him the model name of the speaker we were listening to, which impressed me. He identified it as the Tetra Phoenix TZ . There's a story behind the name: a long one, too long to go into here, but a good one, involving a death, a drive-unit, and a tattoo. Butts then explained that Tetrasonic Productions refers to a recording project that began as a collaboration between him and the renowned recording engineer/producer Rob Fraboni (the Band, the Rolling Stones, Joe Cocker, et al)—and, oh, by the way, would I like to meet him . . . ? 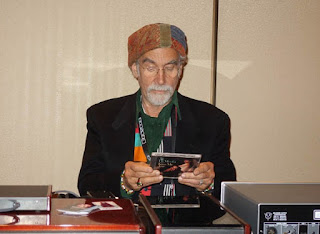 So we went downstairs to the Verdun ballroom, and there, indeed, was the Rob Fraboni, who turned out to be a kindly, sharp-minded man with a command of seemingly all things musical, acoustical, and technological—information that he does not weaponize in the manner of so many other men but shares graciously. I was instantly impressed—even more so when he demonstrated for me, by means of the deltoid muscle-strength test popularized by Dr. John Diamond (see www.drjohndiamond.com), the effects of an electronic device of his own invention: as Fraboni explained, digital playback technology, like fluorescent lighting, has at its core a discontinuous energy that negatively impacts the human nervous system; the device designed by Fraboni—whose voice, incidentally, is indistinguishable from George Clooney's—is said to emit a countering energy, in order to reduce or eliminate those negative effects. This he demonstrated to my satisfaction and mild astonishment.
image: https://www.stereophile.com/images/032418-Adrian%20Butts-600.jpg 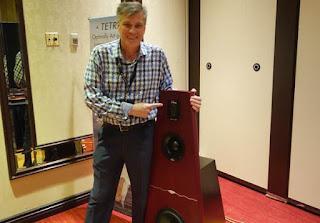 Fraboni also demonstrated some recently made recordings of raga-like pieces of music: hypnotic improvisations that sounded amazing—big, spacious, colorful, and physically involving—over a pair of Tetra 606 loudspeakers, on whose design he and Adrian Butts collaborated. Once again I was astonished—this time by the fact that two non-huge speakers could fill a room so large with sound so good.
So, yes: I had a very nice Saturday, thank you.